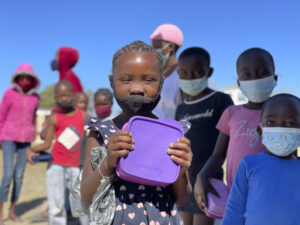 Feed the Children of the World

Food insecurity is an issue all over the world. Ubuntu Mundo (“Ubuntu”) has been feeding vulnerable children in South Africa since 2016. Since Covid-19, it has become painfully clear that the poorest of society are hit hardest during a crisis, 50% of South Africans are now food insecure. That’s why Ubuntu’s work is sorely needed. Feed the children of the world is our mission for a reason.

While 2021 started well, with children arriving each day at both Ubuntu kitchens for take-away meals, government Covid-19 protocols once again shut us down by mid-January. Our on-site team took immediate action. Food parcels were put together. In the beginning of February, 200 families came to the two Ubuntu locations to collect their parcels. In this way we were able to feed children under difficult circumstances.

In March the sun started to shine again – the doors of our kitchens were allowed to open once more. A wonderful moment, especially for the children. But also, for the Ubuntu team. Thanks to their tireless efforts, we were able to provide children with a daily meal again. From our two kitchens and vegetables from our garden, we began serving meals to a total of 350 children every day. In May we celebrated our 100,000th meal. A beautiful milestone. But it is never enough. In September, we were able to include children younger than school age for the first time. Every day since then, about 25 children under the age of three have come to pick up a meal. This marks an incredibly important step in our work. The earlier we can deliver good nutrition to young children, the better it is for their development.

In addition to our work in South Africa, this June for the first time we distributed food parcels to 200 families from Public School 197 in Harlem, NY. While it may sound strange to distribute food parcels in such a prosperous country, food insecurity is a global problem, and the pandemic has stretched communities in desperate ways. Virtually all children at this school in Harlem live in poverty and experience chronic food insecurity.