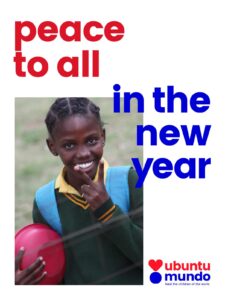 The Holiday season is upon us. This is always a good time to reflect. In this email we review 2022 and lay out our plans for 2023.

Feed the Children of the World

Now in Ubuntu Mundo’s (“Ubuntu”) 7th year of operations, we are happy to report that our work continues to go well. In 2022, this is noteworthy as Covid has had a devasting impact in South Africa – current census data show that more than 60% of the children live in poverty. Additionally, more than twice as many children living in rural areas (88.4%) face multidimensional poverty compared to children in urban areas (41.3%). Food insecurity continues to be of great concern for children in South Africa. Ubuntu’s locations in rural areas are positioned to address the country’s highest need. Feed the children of the world is our mission for a reason.

We began the year with 350 children coming through the gates of our locations each day. It is the best part of an Ubuntu day — smiling, giggling children fill up their containers and enjoy their healthy lunch, going home on a full stomach. As the year progressed, we added pregnant women to our program for the first time, and increased the number of children served to 450 daily.

In September, we celebrated our 200,000th meal. By years end we expect to have served more than 85,000 meals. Great milestones. But given the situation, it is not enough. Food, after all, is a human right.

Throughout the year we were able to make important improvements in the gardens that produce the fresh vegetables we serve. Improved solar-powered water pumps and enriched soil health increase food production on site. These changes reduce costs of the meals we serve and provide additional income as we sell fresh produce in the local market. The first evidence of these improvements started to show during the second half of the year. During the months of July through October we were able to produce 75% of all fresh vegetables needed for the preparation of the meals on our own land. Our gardens not only feed the children but uplift the community. The produce we sell in local markets increases access to healthy food for people in the area. And between our two locations, we employ 14 people, 11 of whom are women.

In total, Ubuntu currently offers daily meals to 450 children. Our immediate goal is to increase this number to 600 during 2023. In addition, we plan to expand farming capacity yielding greater income by 2026. When realized this would be an important milestone towards sustainability. It remains a constant goal to expand the Ubuntu concept to other regions of South Africa and into other countries in the world.  The blueprint is ready, and locations and local leadership are being explored. The Ubuntu formula is simple but oh so effective!